I Have Nothing To Prove To Chelsea – Drogba 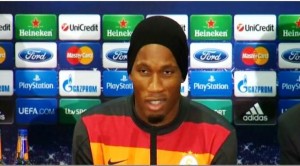 Didier Drogba will have to fight hard to control his emotions when he returns to Stamford Bridge for Galatasaray’s Champions League last-16 second leg against Chelsea, the Ivorian said on the eve of Tuesday’s (March 18) match.

The 36-year-old striker ended a glittering eight-year career with the London club by scoring the winning penalty in the 2012 Champions League shootout victory over Bayern Munich in the final at the Allianz Arena.

After a hesitant start to Galatasaray’s pre-match news conference, Drogba had the reporters in stitches.

“I’ll ask myself the first question,” he said. ‘Didier, how do you feel about returning to Stamford Bridge?

“Well, I’m really happy to come back and to see some familiar faces for a big game in a big competition.

“It’s very difficult to play against Chelsea but it’s not going to be difficult for me to put myself in competition with them because now I belong to Galatasaray and I need to be professional,” said Drogba.

“Of course there will be emotion playing against my ex-team mates, like there was in the first leg,” he added in reference to the opening match in Istanbul that ended in a 1-1 draw.

The big, powerful centre forward was once voted the best player in Chelsea’s history and he said he did not know how he would react if he scored a goal on Tuesday.

Drogba said if he scores against the Blues he might not celebrate the goal, adding: “I have nothing to prove to this club everything I had to prove I proved it with Chelsea. Now I come here with another team and I just want to win the game, I just want to qualify, there is nothing personal against Chelsea, there will never be.”

Galatasaray Coach, Roberto Mancini used to be in charge at Manchester City and said he had good memories of his time in the English Premier league.

However, turning to the task at Stamford Bridge on Tuesday, the Italian said: “We know it is really difficult because Chelsea is one of the best teams in Europe, but in football, never say never, anything can happen if you believe in yourself and we want to do a good job tomorrow.”

We Met The Best Team In England, Solskjaer Admits After Fourth Semi-Final Loss In Two Years