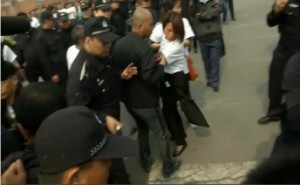 Chinese family members of passengers of Malaysian Airlines flight MH370 clashed with police during protests on Tuesday (March 25) in Beijing against the Malaysian government’s handling of the lost plane.

Protesters marched through the centre of the street, chanting ‘Return our families,’ and some holding signs reading “1.3 Billion People Waiting to Greet the Plane.”

At one point protesters demanded that media, which had been cordoned off into several zones by police, follow them to the Malaysian embassy.

At least a dozen protesters began pulling at media behind the cordoned zone to join them; demanding police allow them to enter the restricted area. Police officers physically removed several of the family members from the scene.

One family member could be seen lying on the ground, passed out, after police moved the media away.

The protest ended after a few hours, when police told protesters to get on buses and escorted them out of the area. 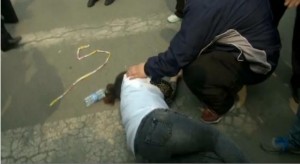 Steven Wang, who would not say which of his relatives was a passenger on flight MH370, said that the second secretary from the Malaysian embassy had come out to meet the protesters after they presented him with their statement.

Criticism of the Malaysian national carrier mounted after some relatives of those on board first received the news that the search for survivors was over in an SMS from the airline, which said: “We have to assume beyond all reasonable doubt that MH370 has been lost and none of those on board survived.”

When asked by a reporter if he still had doubts about the fate of the passengers, Wang said he did.

“Yes of course, because no evidence. They just give out the result from analysis from the satellite data, and nothing found, so why would we believe (that)?,” said Wang, adding “I don’t believe it.”

Of the 239 people aboard the plane which disappeared over two weeks ago on the way from Kuala Lumpur to Beijing, around two thirds were Chinese.

On Monday (March 24) night, there were hysterical scenes at the hotel where relatives met to watch the Malaysian Prime Minister’s announcement that the plane had likely crashed into the South Indian Ocean, leaving no survivors.

Malaysia Airlines has promised to take the relatives to Australia, the focal point of the search.

Bad weather and rough seas on Tuesday forced the suspension of the search for any wreckage of the missing plane.

16 Dead From Carbon Monoxide Poisoning In Chinese Coal Mine