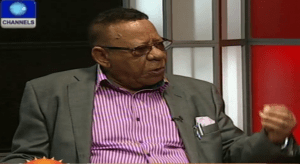 A Senior Advocate of Nigeria, Robert Clarke, on Wednesday said over half of the delegates at the on-going National Conference are too rigid in their stance on how the nation should run, to effect the change the Conference was set up for.

While on Channels Television’s breakfast programme, Sunrise Daily, Mr Clarke, who commended President Goodluck Jonathan for the Conference, “one of the best things that have happened to Nigeria,” expressed doubt in the delegates’ ability to put the nation’s interest above other things.

The lawyer said the elderly delegates who have been in the political circle do not possess the flexibility needed for such a consultation as they cannot change overnight. Hence, “the problem we are going to have in this National Assembly is that such people with fixation of ideas of how the country can be run can never be changed.”

Mr Clarke insisted that delegates including Edwin Clarke, Jerry Gana, and Ayo Adebanjo have fixed minds and cannot be changed. “These are the people who should not be there,” he said.

He labelled them “old horses who have been recycled for the past 40 years,” and further expressed doubts on the outcome of the Conference in light of the fact that the delegates are yet to agree on a voting pattern in the first two weeks.

While speaking on the programme, Mr Clarke stressed that one of the major issues which must be addressed at the Conference is the current Presidential system of government which he described as too expensive for the nation, adding that the system cannot work.

“Powers are being vested on our president which no other president in the world has” he said, maintaining that section 5 of the constitution confers so much power on the President and governors that “they have become demi-gods”.

He however warned that an attempt to change system of governance will be resisted by many people at the Conference, especially the politicians “who are enjoying the system will never allow it”. This, he argued, is another reason why those at the Conference should not be there.

He also said that the experience and expertise of elderly people is needed for the Conference but the set of people who are delegates are fixated.

Mr Clark further accused former president Olusegun Obasanjo for starting the system which now costs the nation 245 million naira to maintain one senator, in a year.

Although he thanked He noted that the Conference will not achieve anything since the recommendations have to go through the Nigerian parliament before going to a referendum. He maintained that the lawmakers would vote down any change which will deprive them of all benefits, including convoys, escorts etc.

“Any change that will be inimical to the interest of the present members of the Houses, they will not accept it.”

Mr Clarke decried the recruitment exercise by the Nigeria Immigration Service which led to the death of several applicants. He lambasted the Minister of Interior, Abba Moro, for hijacking the exercise from the board in charge, which he created.

“Recruitment is the domestic work of the board of immigration, why should the minister take it over? In taking it over, he bungled it. Lives have been lost but what has been done?” he asked.

Speaking on the presidential system, Clarke said “the president cannot sack Moro” because “Moro has the support of a very strong member who has recommended his name.” Moreover, “we are going into an election period; Mr President will not want anything from any constituency.”

He further claimed the President failed to sack the Minister as he ought to have done because of the influence Moro’s godfather may have on the forthcoming elections.

Clarke suggested the President should have set up a judicial commission as a means of sacking the Minister, without claiming direct responsibility for the decision, in order to appease Moro’s supporters.

If We Do Not Kill Corruption, It Will Murder Nigeria – Buhari