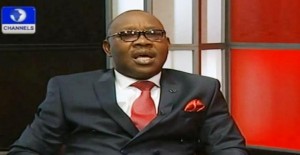 A Legal Practitioner, George Eke, believes that the issues of transparency in the NNPC and the controversies trailing the Petroleum Minister can only become non-existent through the passing into law of the Petroleum Industry Bill.

While speaking on Channels Television’s Sunrise Daily on Tuesday, he noted the relevance of the Nigerian National Petroleum Corporation, NNPC, in the economy of the country and in general governance was very crucial and this makes everybody interested in its affairs.

Eke said that “even among politicians…as they are chanting their slogans in campaign arena, their eyes are always on NNPC accounts” as it is this account that “determines what happens to a regular administration.”

He noted that this has been the reason why everybody who had headed the NNPC has experienced some form of storm.

He explained further that General Mohammadu Buhari, whom many Nigerians have seen to be highly incorruptible, was also fingered in the first scandal that rocked the commission, a situation that showed how much Nigerians focus on the agency.

Speaking about the allegations of wasteful spending levelled against the Petroleum Minister, Mrs Allison-Madueke, Eke revealed that the NNPC approves the logistic facilities for oil companies to aid their operations in Nigeria; he then asked if it was logically reasonable for the Minister to have to join commercial flights to catch up with operators whose prompt and timely availability for official duties, she facilitated.

He referred to the allegation against the Minister as politics sponsored by the opposition.

He noted that the Petroleum Industry Bill is an important bill to solve the murkiness in the petroleum industry, as it would ensure private governance, whereby the agencies run like a business and would be bound to give accounts.

He said that the delay in the passing of the bill was due to the lack of political will to ensure a reform in the industry.

Eke admitted that the NNPC was indeed not a transparent agency and this allowed the politicization of its controversies to thrive. He maintained that the solution to this situation was the passing into law of the Petroleum Industry Bill.

He said that he was advocating for the Petroleum Industry Bill so that the country could have a legal framework and administrative paradigm to run the sector.