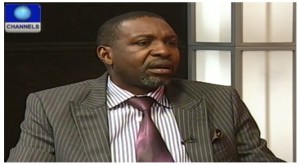 Nigerian lawyer, Malachy Ugwumadu, on Thursday decried a reported demand of a total of N45 million naira quarterly allowance by members of the House of Representatives, stating that such a move would demoralise the people.

Members of the House had on Wednesday reportedly held a closed door meeting with their leaders to clamour for increase in the quarterly allowance, from N27 million per quarter to N45 million per Rep. Reacting to this development via a telephone interview on Sunrise Daily, Ugwumadu said the misalignment between the needs of the people and the activities of the operators of government was a “recipe for some form of very serious concern”.

The public affairs analyst said the figures being reeled out by the lawmakers was not in tandem with the reality of what the citizens earn particularly when placed against the backdrop of the minimum wage, “which is 18,000 naira, and the resentment which they also stand against policies and activities of government would ordinarily advance the well-being of the Nigerian people.”

He mentioned that the lawmakers were creating problems for themselves and that “even if they earn more than that 45 million naira per quarter, you cannot have the safety to enjoy it”.

“The country that has just concluded the rebasing system in which we are made to believe that Nigeria is now the biggest economy in Africa and one of the best in the world, that does not translate practically in terms of what the people are experiencing on daily basis,” he added.

He further stated that “those kinds of signals clearly point out to the fact that the government has become publicly animated to the welfare and well-being of the people.”

Ugwumadu also faulted the action on moral grounds, especially “when you arrogate the rights to fix your own emoluments,” stressing that the right to increase or fix salaries and emoluments was within the jurisdiction of the Revenue Mobilisation Allocation and Fiscal Commission.

It “is never the responsibility of those occupying those offices,” he added.

The lawyer advised that legal action be taken to deter the House from taking such a step.

“I think that beyond making these things campaign issues, organisations and institutions that have varying concerns with this development can approach the court and seek restrictive orders to prevent them (Representatives) from this recklessness that has turned us into a very country,” he said.