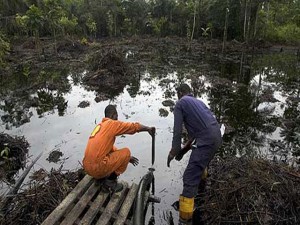 Bayelsa State Governor, Hon. Seriake Dickson has berated international oil companies over what he referred to as, ‘insensitivity to the plight of oil producing communities in the Niger Delta.’

He stated that over the years, the accumulated effects of their activities were beginning to have its toll on the people of oil producing states, as they have impacted adversely on the lives of the people, especially Bayelsa, where oil companies have the bulk of their operations.

“I have said it before that what has been going on in Bayelsa State and in all oil producing areas concerning the levity with which oil companies treat the issues of the environment and the maintenance of environmental and health standards is unimaginable.

“We all have a duty to keep the environment safe and hand it to our children’s children, the same way our parents handed it over to us. Already, in our villages and communities, we can see what is happening; the accumulated effects of several years of oil exploration and exploitation; a regime of lack of transparency and accountability by oil companies, who are operating in this area because they have no respect for our laws and even our lives”, he said.

He urged Non-Governmental Organizations and other well-meaning groups to join Government in championing the cause of protecting the environment for the sake of posterity.

In the same vein, the Governor condemned the activities of pipeline vandals and operators of illegal refineries for their unpatriotic acts, calling on the people of the state to see the fight against such crimes as a collective one, adding that his administration would create awareness on compliance to standard practice as regards the environment.

“Of recent, our own people have added to the environmental challenges even in a more direct and insidious way. They break pipelines where crude oil flows freely on our precious great land, spoiling our rivers and destroying our ecosystem.”

According to him, the Government would strive to ensure adherence to environmental sanitation laws of the state to keep Yenagoa, the state capital clean and green in line with the tourism drive of the restoration agenda, as it is the most important heritage.

Governor Dickson remarked that his administration was in the process of working on initiatives to improve on the sanitary situation of communities, especially in Yenagoa and called on the people to support government to accomplish the task of safeguarding the environment.

Nigeria Is Broke, Leaders Should Cut Down Spending – Onyekpere