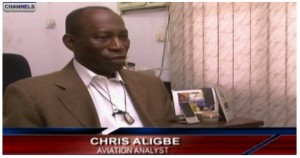 An aviation expert and the former image maker of the defunct Nigerian Airways, Chris Aligbe, has faulted a plan by the Nigerian government to merge the Nigerian Civil Aviation Authority, The Nigerian Airspace Management Agency and The Nigerian Meteorological Agency, saying it is not the best thing to do.

Mr Aligbe said that each of the agencies proposed to be merged had its specific function under the International Civil Aviation Organisation.

“I was shocked to the marrow when I heard it. the decision is funny,” he said.

The Nigerian Civil Aviation Authority (NCAA) is the regulatory body for aviation in Nigeria. It became autonomous with the passing into law of the Civil Aviation Act 2006 by the National Assembly and assented to by the president of the Federal Republic of Nigeria.

The Act not only empowers the authority to regulate aviation safety without political interference, but also to carry out oversight functions of airports, airspace, meteorological services as well as economic regulations of the industry.

The NCAA has just faced a re-audit exercises of the CAT 1 rating it obtained in August 2010.

While the NCAA is the apex regulatory body in the country, the Nigerian Airspace Management Agency (NAMA) is an air navigation service provider with a mandate to manage the Nigerian airspace to a level consistent with the requirements of the International Civil Aviation Organisation standard and recommended practices.

The Nigerian Meteorological Agency (NIMET) came into existence by an Act of the National Assembly – NIMET (Establishment) Act 2003, enacted on May 21, 2003, and became effective on June 19, 2003 following presidential assent.

It is a Federal Government agency charged with the responsibility of advising the government on all aspects of meteorology; project, prepare and interpret government policy in the field of meteorology; and to issue weather (and climate) forecasts for the safe operations of aircrafts, ocean going vessels and oil rigs.

The Act also makes it the responsibility of the agency to observe, collate, collect, process and disseminate all meteorological data and information within and outside; co-ordinate research activities among staff, and publish scientific papers in the various branches of meteorology in support of sustainable socio-economic activities in Nigeria.

A report by the Stephen Orosaye-led Presidential Committee on Rationalisation of Federal Government Parastatals put the three agencies on a merger spot.

Merging all theses agencies, to Mr Aligbe, is not an ideal thing to do. He insisted that the government should seek advice from the aviation industry of other countries before taking such decision that would create problems in the sector.

Consultation of international agencies is the way to go, he said.