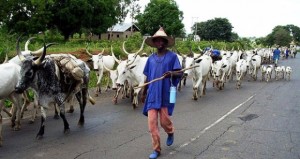 The Delta State Government has set up a high powered Task Force headed by the State Commissioner of Police, Mr. Ikechukwu Aduba, to check the influx, indiscriminate movement and activities of cattle and the herdsmen across the state.

While Inaugurating the task force at the Government House, Asaba, the State Governor, Dr. Emmanuel Uduaghan, observed that activities of cattle and cattle rearers have posed a new security challenge in the state.

The sudden influx of cattle rearers in the state, who in recent times have attacked farmers in their farms ,robbing them and even raping their women has sent fear down the spine of farmers who now dread the thought of going to their farms in their own communities.

The Delta State Government has taken a huge step to put a check on the activities of these cattle rearers and has set up a task powered force to do so.

The task force have been mandated to monitor the herdsmen and also; identify their origin; arrest anyone in possession of fire arms and other dangerous weapons; control the influx of illegal immigrants to the state and hand over identified illegal immigrants to the Comptroller of Immigration in the state; check activities of people who occupy uncompleted buildings; and ensure that periodic report of the activities of the task force is sent to the State Security Council meeting.

In an interview session, the Chairman of the task force, Mr. Ikechukwu Aduba, who is the Commissioner of Police, assured all Deltans of their safety, noting that the task force would not fail in its responsibility of making the state unsafe for people with sinister intentions.