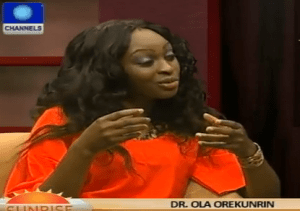 The Managing Director, Flying Doctors Nigeria Limited, Dr. Ola Orekunrin, on Saturday said that Nigerians do not place enough value on human life, while revealing that there were no charity organisations set up for soldiers in the Army.

Appearing as a guest on Sunrise, Orekunrin commended the efforts of the United States in finding the 234 abducted school girls, noting that the U.S. government had deployed one of its best drones, The Hawk, to help in the search.

This action, Orekunrin said was a strong indication of the value the American society placed on human life.

Contrary to the general attitude of blaming government for every ill, the doctor said it is not a government issue, stressing the need for citizens to also contribute.

“I think that we are very quick to point the finger at government but I had a quick look on Google (and) we dont have a single charity set up for our soldiers,” she said.

While on the programme, Orekunrin spoke about Nigeria’s first air ambulance service, which she founded five years ago. The service ensures that patients, especially those in rural or remote areas, in need of medical care are conveyed by a helicopter or a fixed wing jet to any location where the required medical care can be given.

She disclosed that her organisation in conjunction with the FRSC and aviation partners, OAS Helicopters, will stage the first road accident air-rescue in Nigeria on Wednesday.