Eight schools participating in the sixth edition of the Channels National Kids Cup have qualified for the quarter finals.

In what can be considered a derby match, two teams from Lagos, Ebute Meta Primary School and Eunifrance, provided pure entertainment to spectators.

Ebute Meta had taken a 2-0 lead in the first half but Eunifrance levelled up in the second.

Unfortunately, the last kick of the game favoured Ebute Meta, as goal keeper, Bello Michael’s error deprived them a place in the quarter finals.

Eunifrance needed a draw to qualify but the late goal ended their hopes of scaling through. It was all tears for the young kids, as they were looking forward to remaining in the competition.

In the first game of Day three, the Governor of Delta State, Dr. Emmanuel Uduaghan, was one of the spectators that witnessed Nana Primary School, Delta beat Toyibat of Lagos 3-1 to qualify.

Despite the defeat, Toyibat still made it to the next round after securing victories in their first two games. 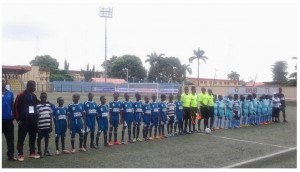 In another game, Bishop Smith Primary School from Kwara was unfortunate not to make it to the next round after playing a two all draw with Ago-Egba of Lagos.

In another Group B fixture, Samuel Ajayi Memorial School of Ogun had an easy 4-1 victory over First Baptist of Osun to advance to the next stage.

In the quarter finals, it will be another Lagos clash between Dr Teslim Elias and Ago-Egba while Samuel Ajayi of Ogun will play IMG of Oyo.

The Boys from Kaduna will lock horns with Toyibat of Lagos. All the matches would be played at the Agege Stadium on Sunday.

After the quarter final games, the teams that qualify for the semi finals will play at the Teslim Balogun Stadium Surulere, Lagos.

I Have Not Gotten A Fresh Offer From Arsenal, Says Aubameyang