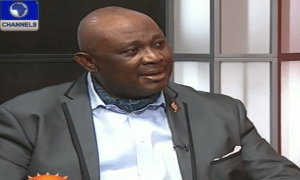 A Strategic Security Consultant, Max Gbanite, on Monday spoke against any attempt by the Federal Government of Nigeria to negotiate with the Boko Haram sect, in order to secure the freedom of the 234 school girls, abducted in Chibok, Borno State, on April 14.

Appearing as a guest on Sunrise Daily, Gbanite said the exchange of Boko Haram members in detention for the kidnapped girls “should never happen,” noting that such a release would be blackmail.

“They must release the children first of all, unconditionally. The children are innocent. They had no hands in this crisis” Gbanite said, maintaining that dialogue, not negotiation, with the sect may proceed after that is done.

Negotiations, he said, would mean that there is a representation of both parties but “at this particular point in time, who would negotiate on behalf of the terrorist group?” he asked,

Speaking about the #BringBackOurGirls slogan, Gbanite submitted that “there is a twisted orchestration by the international community, in my own view, to suggest that government is not doing enough.”

Although the campaign started in Nigeria, Gbanite said it was a combination of both international and local efforts, insisting that “government is doing what they are supposed to do.”

He further said that those blaming the rise of the Boko Haram insurgency on corruption were wrong, as “these are two independent issues that should never mix.”

On the dialogue which was reportedly called off in the last minute, the analyst urged the government to “maintain international best practices” and continue to do so, without hiding anything from the nation.

I encourage Nigerian government to go into constructive engagement but should not “negotiate innocent children.”