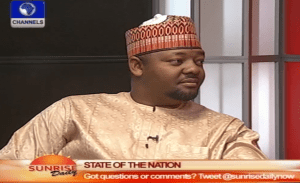 The Chairman of the All Progressives Youth Forum, APYF, Ismaeel Ahmed says the Nigerian Government has been nonchalant in taking action concerning the security challenges in the country.

He criticized the manner in which the security issues had lingered, with issues getting the attention of social media and the international community before they get addressed.

He said that Nigerians feel a sense of abandonment because the Government, whose primary responsibility is to secure the lives and properties of the citizens, has abandoned them.

“Nigerians feel this way because a day after the Nyanya bomb blast in Abuja, the President went for a political rally”, he stressed.

“The President spoke about the Chibok girls a week and a half after it had trended on social media, the concentration was on the World Economic Forum, he didn’t address it”, he lamented.

Mr. Ahmed criticized the Government for not paying attention to Borno and other northern states under emergency rule, stating that it was the military and the Police that were in charge of security in the state and not the Governor.

He, therefore, urged the Government to take responsibility over the lives and properties of Nigerians and also be fast in taking decisions concerning the nation.