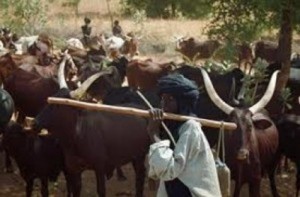 The leadership of  Miyyetti Allah Cattle Breeders Association of Nigeria (MACBAN) has threatened to drag  the Nigerian Military to the Court  over what it termed as the incessant killings,  harassment and infringement on the rights of its members.

At a press conference in Kaduna, the National Secretary of the association,  Baba Usman Ngelzarma, lamented the  injustice meted against Fulani herdsmen across the country and warned that they would no longer fold their arms and watch their members being unjustly killed and intimidated by the military on daily basis.

Reacting to the alleged killing of six Fulani herdsmen by soldiers at Saminaka in Lere Local Government of Kaduna State, MACBAN described the incident as brutal and deliberately planned to eliminate their members, expressing anger that such wicked act was carried out by security agents.

The association said that the six deceased Fulani herdsmen were arrested in Kunkuru village in the same Lere Local Government while they were returning from their grazing point in the Southern part of Kaduna State to their place of origin in Jigawa State. They alleged that they were shot dead by soldiers attached to the Joint Task Force in the Local Government.

The association, while calling on the military authorities to fish out the soldiers that perpetrated the killing and bring them to justice, also demanded for the immediate compensation of the families of the affected victims by the military, as well as the immediate arrest and prosecution of the village head of Rumanda by the security agencies over his alleged role in the killing of the six Fulani herdsmen.

The Spokesman of One Division Nigerian Army, Colonel Usman Abdul, did not answer the telephone calls by our correspondent, as we sought to have the military’s reaction to the allegation.