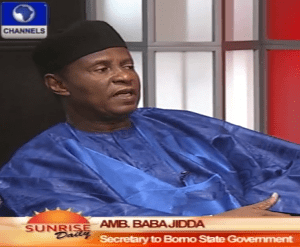 The Secretary to the Borno State Government, Baba Jidda, on Thursday said out of the 276 girls abducted on April 14, in Chibok, 219 are yet to be reunited with their families.

“The initial figure of abducted girls was 276, 53 found their way back home and 223 girls were still missing. Thereafter, four returned to their parents ‘quietly’,” he said.

Appearing for the first time on Sunrise Daily since the #BringBackOurGirls campaign started, Jidda gave an account of the events of the fateful day when members of the Boko Haram sect attacked the school, disclosing that the girls were alone in their dormitories, “probably with two or so security men.”

He explained that the school staff had staff quarters “fairly detached from the main dormitory.”

According to the official, the State governor, the security chiefs, commissioner of education as well as the First Lady had visited Chibok to meet with parents of the girls who had been found.

On allegations that the State government had stage-managed the abduction to make the State of Emergency pronounced by President Goodluck Jonathan appear ineffective, Jidda said the videos released by Abubakar Shekau, turned the false claims into “anti-climax”.

“Three days ago, you heard the Chief of Defence Staff saying that the security agencies know where the abducted girls are and that he is not going to say anything more than that, but they are on it and sooner or later, they are going to bring back the girls, hopefully alive.”

Jidda went on to describe the accusation as “totally false and mischievous”.

Concerning the letter reportedly written by the Minister of Education asking that some schools be closed and students be moved to Maiduguri to sit for examinations, Jidda said the Minister had only asked for security for the WAEC officials, but never mentioned Chibok or the girls.

Jidda disclosed that the Borno government had forwarded the Minister’s request to the Commissioner of Police and asked him to provide security.

“The Minister of Education is not correct in his insinuation that he has given express directive to the Governor (or whoever) about Chibok, Chibok girls,” the SSG insisted.

He went further to say that the State government did not have control over the security agencies and that it used its security vote more than any other State in the Federation. “We have never received assistance from the Federal Government in the area of security.”

“We have spent about 10 billion Naira on security. We provided more than 400 vehicles to the security personnel. We paid their logistics… we do everything.”

Despite the conflicting accounts on the events which led to the abduction of the girls on April 14, Jeddi said the State government could not take responsibility for those who gave such reports, noting that their account of the story was the authentic one.