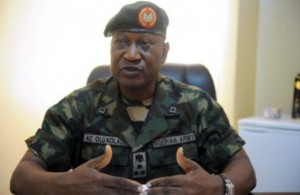 The Nigerian military has defended its confiscation of copies of three national newspapers, the Punch, Leadership and the Nation, around the country, saying it was a ‘routine security action’.

In a statement released on Friday hours after the bizarre incident, the military spokesman, Major General Chris Olukolade, said the military would not deliberately infringe on the freedom of the press without cause.

He said that intelligence indicated that materials with grave security implications were being moved across the country through newsprint related consignments.

According to him, the exercise had nothing to do with the content or operation of the media organisations.

“The Defence Headquarters wishes to clarify that the exercise has nothing to do with content or operation of the media organisations or their personnel as is being wrongly imputed by a section of the press,” Major General Olukolade said.

“The military appreciates and respects the role of the media as an indispensable partner in the on-going counter-insurgency operation,” he said, further assuring the general public and the affected media organisations that the exercise was a ‘routine security action’ and should not be misconstrued for any other motive.

Earlier report say copies of the Leadership Newspaper were confiscated along the Abuja-Kaduna expressway and at the Abuja airport.

At the Edo State office of the Nigeria Union of Journalists in Benin, copies of Leadership and Nation Newspapers were seized from vendors.

The Punch Newspaper was also allegedly involved in the raid.

The Punch Newspaper Editor, Toyosi Ogunseye, on twitter, confirmed that front pages of the newspaper were torn at the Lagos airport on Friday morning by soldiers.

The Nation online reported that soldiers impounded several vehicles conveying its newspapers to various stations in the South-south and other parts of the country.

The paper also said that troops stormed its circulation depot located on Effurun, Sapele in search of the newspapers and the company’s staff.

“A van conveying the day’s newspapers to Warri and Benin City was seized by soldiers of the 3 Battalion of the Nigerian Army at Okwuokoko, Delta State,” it said.