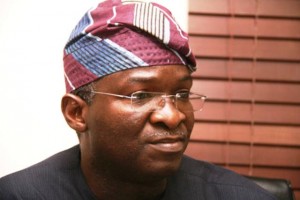 The Lagos State Chapter of the Peoples Democratic Party (PDP) is accusing Governor Fashola and the All Progressives Congress (APC) of stealing Lagos Funds to prosecute election in Ekiti State, calling on relevant anti-corruption Agencies to commence necessary probe and arrests.

The party on Wednesday stated that it was hinted by reliable source within the council, especially in the council’s where the chairmen opted to be honest and trust worthy. The source said that the “councils are particularly averse to the move because they are indeed already cash strapped by the incessant demands by the Governor”.

The PDP claimed that the Governor compelled the 57 Councils in the State to contribute 25 Million Naira each, from their May, 2014 Federal allocations or borrow from Banks in order to support the Governorship re-election of Kayode Fayemi in the Ekiti Governorship election that will commence on Saturday, 21 June.

The party further claimed that “the sum of 1.425 Billion Naira is expected from the 57 Councils and a large chunk of it has been transferred into the personal account of Governor Fayemi, using a new generation Bank Network”.

The spokesman for the party, Taofik Gani, said the party could prove that Governor Fashola had raised over five billion Naira for the Ekiti governorship election with much of the monies directly stolen from the State and Local Councils Treasury, This is notwithstanding other logistics mobilised to be deployed from Lagos State to support Governor Fayemi in Ekiti State.

Further explaining, he said: “We are concrete sure of our facts that 25 Million Naira has been contributed by each of the 57 Councils in Lagos State to support Governor Fayemi’s wishful re-election.

“Fashola has again confirmed beyond any doubt that he is indeed a corrupt Governor. We also wonder why similar directive to contribute monies is not deployed to subsidise the astronomical increment in the LASU tuition Fees which has led to protracted strike and protests in the State. We call on anti-corruption agencies to immediately get to the root”.