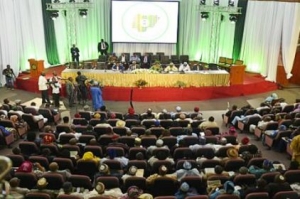 Delegates at the National Conference have endorsed diaspora voting in future elections in the country.

A recommendation which sought to deny this group of Nigerians this right was rejected by delegates as they supported the idea in a clear voice vote.

The endorsement, which was one of the key recommendations of the report of the Committee on Foreign Policy and Diaspora comes as good news for Nigerians living abroad.

The conference had started the day’s proceedings with discussions on the explosion that rocked a public health college in Kano State on Monday, but the motion to condole with the families and people of Kano State came with another concern as the delegate representing the Nigeria Union of Journalists, Sani Zoro, complained that there had been no message of sympathy from the Office of the President to the victims of the Kano attack.

The Deputy Chairman of the National Conference, Professor Bolaji Akinyemi, called for caution regarding the allegation, especially as Mr Zoro had alleged that there had been a deliberate lack of concern for victims in states ruled by the opposition  party. After this, did the conference observe a moment of silence in honour of the victims.

The conference then went on to consider the report of the Committee on Foreign Policy and Diaspora. After the Committee Chairman gave a summary and delegates had discussed the report, several amendments were considered, one of which was that which allows Nigerians in diaspora to vote in future elections.

The next amendment sought to have the excesses of first ladies and politicians in using diplomats for unofficial purposes curtailed. Although, the amendment brought the Deputy Chairman to a stop for a while, the conference went ahead to unanimously approve the amendment.

The conference, having approved most of the recommendations put forward by the committee and adopted the report, moves next  to the report of the Committee on National Security.

Ortom Commiserates With NUJ Over Death Of Benue Chairman, Ukuma