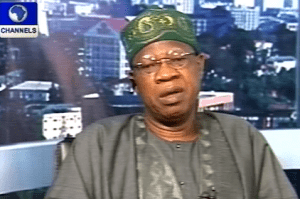 The National Publicity Secretary of the APC, Lai Mohammed, on Thursday disclosed plans of the All Progressives Congress, which lost in the just concluded Ekiti governorship elections, to head to Court for various infractions against its members, during the elections.

“We are going to challenge all these infractions in court so that it would be clear we are not making anything up,” he said.

Appearing as a guest on Channels Television’s breakfast programme, Mr Mohammed listed various offences for which the party was going to seek redress for in Court, including the detainment of Governor Chibuike Amaechi and other APC governors on the day of Fayemi’s last rally.

He also mentioned the arrest of some APC leaders the night before the election, as one of the issues for which they seek redress, noting that they had no problems with the outcome of the election, but with the process.

“Two weeks before the election, a peaceful rally by the APC was forcibly dispersed which led to the death of an individual,” he said, adding that there was no investigation into the matter.

He also mentioned that “a vehicle was intercepted containing 200 boxes of electoral material which INEC discredited as waste material” and there was yet to be an explanation for a reported aircraft carrying suspicious material, which landed in Ekiti.

Mohammed explained that “what happens before, during elections determines if the nation’s democracy is being deepened.”

However, the APC spokesman said that the Party had no intention to contest the result of the election and it was standing by Fayemi’s decision, unless there was compelling evidence to necessitate such a move.

“We have gone beyond the issue of who lost or who won the election”, he said, but insisted that the over-militarisation of the process created fear in the electorate which may have caused many APC loyalists to stay clear of the election.

“We have absolutely no problem or issue with law enforcement agencies in keeping peace” he said, but noted that it was a “selective keeping of peace” which was against the opposition. He claimed that members of the APC, as well as some accredited journalists had been “deported” and “forcefully removed” on the day of the election.

He further insisted that certain incidents, if not corrected, would not give the desired type of democracy.

On the emergence of Ayo Fayose as governor-elect, Mohammed said that the concession of defeat by Fayemi and the APC was evidence of the opposition’s democratic nature.

“By this we have shown the world that we are true democrats and that election is not a do or die affair”, he said, maintaining that the Party had respected the wish of the people.

On his part, Chairman of the Lagos Chapter of the PDP, Tunji Shelle, described allegations of the APC spokesman as “strange”.

According to him, security personnel were professional in their conduct. 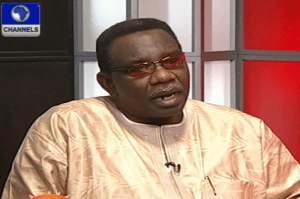 Shelle, a second guest on the programme, while speaking about the election, commended the outgoing governor, Kayode Fayemi, for sportsmanship but noted that the act was not first of its kind.

“Our own candidate in Lagos during the last election congratulated Fashola in the same vein as Fayemi did.”

He noted that Fayemi had prepared well but somebody else prepared better, adding that the last time governance was taken away from PDP, it was through “judicial rascality”, since Ekiti was a PDP state.

On reports of the ejection of certain people allegedly lodged in hotels to perpetuate electoral crime, Shelle said that the security personnel did a good job of evading any unwanted occurrence. They were there to disrupt the electoral process, he insisted.

He, however, defended the presence of the Minister of State for Defence, Musiliu Obanikoro and Minister of Police Affairs, Jelil Adesiyan in Ekiti despite the fact that security operatives did not permit APC governors.

According to him, they had been lodged in Akure, and had gone into Ado-Ekiti briefly, on private matters, as PDP members and were not on a mission to influence the election.