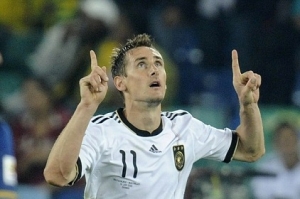 Germany forward, Miroslav Klose, has scored his sixteenth goal of the FIFA World Cup, making him the record highest goal scorer of all times at the tournament.

Klose scored the second goal for Germany to surpass the record set by Ronaldo De Li Ma, in the 7-1 mauling of host, Brazil in the semi-finals of the ongoing World Cup on Tuesday at Belo Horizonte.

The 36 year old striker had moved level with former Brazil star, Ronaldo, on 15 goals when he scored in Germany’s 2-2 draw against Ghana in the group stage.

After scoring against Brazil, in his 23rd career World Cup game, Klose refrained from doing his trademark back flip.

“I got hit in my left foot while attempting a shot and I was not able to do the flip”, he said.

Germany coach, Joachim Loew, praised the veteran and only true striker on the team.

“We believe that he really deserves it. Because at his age, he is still playing at the highest possible level.”

It was his second of the tournament after he came off the bench against Ghana to net in the group stage, which put him level with the Brazil legend.

Klose has scored at four consecutive tournaments , only the third player to achieve that feat, after Brazil legend Pele and West Germany’s Uwe Seeler.

In 2002, Klose scored five goals, all of them headers as an ageing Germany side progressed to the final. He added another five on home soil in 2006, where he also won the Golden Boot, before netting four more in South Africa in 2010.

FA Cup: Leeds Stunned By Crawley As Spurs, City, Chelsea Reach Next Round