Problems Surfacing At The National Conference Had Been Foretold- Legal Practitioner 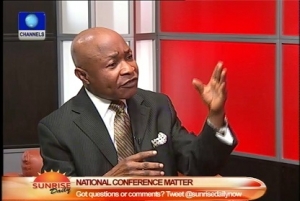 A legal practitioner and Chairman of the National Newspapers Editorial Board, Mr Chris Akiri said some Nigerians are not surprised by goings-on at the National Conference, noting that “even before the conference began, it had been foretold”.

Speaking as a guest on Channels Television’s Award-winning breakfast programme, Sunrise Daily, Mr Akiri said “what is going on was foretold before they started. The meeting was going to be characterised by dissensions and fruitless arguments because of the disparate nature of the delegates and where they come from” adding that “some of us are not surprised that the thing is going this way”.

He noted that the smooth sailing hitherto enjoyed by the delegates was sacked by the realisation that all the things discussed and voted for by delegates at the conference will favour some parts of the country.

“From time to time, their constituents continue to advise them either for or against some of the decisions already reached. So they now say so this is going to favour that part more than us, are you subscribing to this?” adding that “I will not be surprised if this argument goes beyond this”.

He also faulted the adoption of 70 per cent as the consensus benchmark for decisions taken by delegates at the conference noting that “all over the world, and in our country (Nigeria) in particular, if you want to change, adopt, alter, review anything, as far as the constitution is concerned, it is two thirds (2/3) not three quarters (3/4).

“So for you to look for ¾ consensus, you are saying that so many decisions will not be adopted” he said.

Mr Akiri also said some delegates from the same region with a high number can scuttle the chances of any recommendation if it doesn’t favour their region.

He however praised all the recommendations that have been adopted by the delegates but was quick to add that “it was by voice votes, without regard to whether it is 70 or 75 per cent consensus”, wondering why they “now want to bring the issue of 70 per cent consensus, which is different from what they have been doing” adding that “that is the problem; they are now at the final stage and they want to bring in percentage vote”.

He called on Nigerians to be reasonable on the percentage of the resource control of states due to different ecological systems of the regions the state are situated “to avoid problems in the country”.

He cited the provision of the 1999 Constitution which stipulates that at least 13 per cent be given to the south south states before the National Assembly settles down to review the percentage that will be due the region arguing that “you cannot say the National Assembly has not settled down 15 years after| return to democracy in 1999.

Despite the establishment of the Niger Delta Development Commission (NDDC) and the Ministry of Niger Delta Affairs to alleviate poverty and take proper care of the needs of Niger Deltans, Mr Akiri described their activities as “a mere flea bite on the charnel of problems in the Niger Delta”.

He accused the Ministry of Niger Delta of doing nothing because the ministry is not manned by indigenes of the region, describing the NDDC as a “catastrophe”, insisting that “it does nothing” to change the fortunes of the indigenes.

Mr Akiri made these statements while reacting to goings-on in the National Conference and the recommendations of leaders of the six geo-political zones.

The leaders of the six geo-political zones at the National Conference that deliberated on resource control and power devolution had recommended that the 13 percent resource control be increased to 18 percent, while another five percent be reserved for the development of solid minerals in Nigeria.

They also recommended that five percent be reserved for the rehabilitation of the northeast, northwest and north central zones of the country.