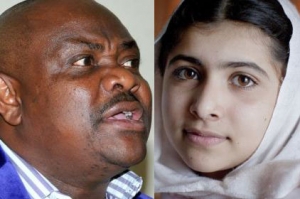 Officials of the Malala Foundation have decried Nigeria’s ranking as one of the countries with the worst figure of out-of-school children in the world.

The officials expressed their views during the visit of Pakistan girls’ education activist, Malala Yousafsai, to the Minister of Education in Abuja.

Members of the foundation, officials from the United Nations and the Department for State Services were on a fact-finding mission to the Ministry of Education as part of activities to mark the Malala Day in Abuja.

The team questioned the Federal Government’s strategies on education and sought to know why it was yet to achieve significant success in tackling the challenge of access to education and enrolment of the 10.5 million out-of-school children in the country.

The Minister of State was swift to reel out the various projects by the Federal Government to support the states to enrol the millions of out-of-school children across the country but the team appeared unimpressed.

The Minister of State for Education, Mr Nyesom Wike, then explained that the Federal Government was not to blame for the challenge but the states. He revealed that 139 billion naira had already been given to states to improve support.

He, however, promised that the Government would ensure an additional enrolment of at least 2 million children by 2015.

The Malala Foundation officials advised the Federal Government to co-operate better with the states to alleviate the crisis.

The group’s visit to Nigeria takes place almost three months after the abduction of the Chibok girls on April 14.

The renewed pledge by the Government to up the enrolment figures is one Nigerians hope would reduce the education crisis in the country.