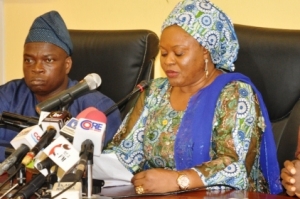 Lagos State Government, mindful of the pivotal role of Education and the critical role of teachers in the development and economic growth of any nation, says it would continue to be responsive to their welfare and that of other members of its workforce.

The State Commissioner for Education, Mrs. Olayinka Oladunjoye, said this while briefing newsmen at the Bagauda Kaltho Press Centre, Alausa, on Thursday.

She disclosed that this conviction of Government has been the driving force behind its huge investment in Education as well as training and welfare of teachers in its quest to become a model of excellence in Education in the African Continent.

She said that in order to provide qualitative education to the citizenry as well as overcome some of the challenges facing the Education sector; the State Government recently employed no fewer than 1,775 new teachers into the system as secondary school teachers.

She reiterated that Government has been doing this in the face of the limited resources available to it against the background of the competing demands for the resources, adding that Lagos remains perhaps the only state that has consistently and doggedly paid its workforce including teachers up to date and when due.

The Commissioner debunked the insinuations in some quarters to the effect that Lagos State teachers were not happy with the Government, restating that one of the hallmarks of the present administration has been its responsiveness and priority attention to the welfare of its workforce.

The Commissioner said teachers in the state are happy “because before now they did not have the kind of empowerment that they have been provided with” adding that with the EKO Education Project, teachers in the State have been empowered and given some level of accountability which is unprecedented in the nation’s Education history.

Assuring of the State Government’s willingness to complete payment of the 27.5 percent Special Teacher’s Allowance, Mrs. Oladunjoye said that Government was working assiduously with a view to paying the balance of the Special Allowance to the teachers.

“Government therefore craves the understanding of its teachers on this, bearing in mind that government will not hesitate to pay the balance of the allowance as soon as possible. Suffice it to say that the State Government is also determined to make the teaching environment and learning process very conducive to enhance efficiency and effectiveness”, the Commissioner said.

Also speaking, the Commissioner for Information and Strategy, Mr. Lateef Ibirogba, who was also at the briefing, said that the State Government enjoys a robust relationship with the teachers, adding that the Government could not afford to toy with the welfare of such an important player in its Education sector.

The Special Adviser on Media, Mr. Hakeem Bello, who was also at the briefing, said that while the State Government was not joining issues with any publication, with the advent of new theories in political circles and the possibilities of bandwagon effect, there was a need to put issues in proper perspective.

Later in an interview after the briefing, the State Chairman of the Nigerian Union of Teachers, Mr. Segun Raheem, said that the NUT was not just a labour union but also a professional group which knows how to go about its agitations, stressing that such agitations does not always lead to anger.

He added that from the way the discussion was going along with the Government, there was hope that the State Government would pay the balance of the allowance.

He said that there have been commitments from the State Government on the allowance which has seen the payment of an initial 9.2percent and later another 9 percent with the remaining 11.5 percent being expected.

Raheem said that two months ago, the NUT wrote to the State Government on the balance and that the matter was presented before the Joint Negotiation Council and a pay policy committee was set up with the teachers also invited to present their case, which it did and a subcommittee was set up to look into the financial implication.

The briefing was also attended by the Permanent Secretary in the Ministry of Establishment, Training and Pensions, Mrs. Sade Jaji.