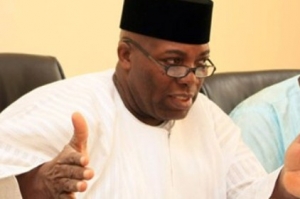 The President, on Tuesday, fired back at a faction of northern elders, who, on Monday gave him up until October to produce the abducted Chibok schoolgirls or forget about 2015 Presidency.

The President’s Special Assistance on Public Affairs, Dr. Doyin Okupe, in a statement, described the northern elders’ ultimatum as preposterous and one meant to cause what he called “hate mentality and mischief.”

He said that the President does not need an ultimatum to do his job and that he was doing a lot to rescue the Chibok girls.

He pointed out seven areas where the President has demonstrated great concern on the Chibok issue to include, improving on the military’s professional and personnel capabilities, taking advantage of the offer made by the international community, and securing the nation’s borders among others.

According to Dr. Okupe, “The issue of insurgency, especially those ideologically based on Islamic extremism, is a global phenomenon and requires tact, military capability, serious de-radicalisation techniques and community based counter insurgency programmes to ensure success.”

The faction of the Northern Elders Forum led by Maitama Sule, on Monday, gave President Goodluck Jonathan an ultimatum till the end of October 2014 to produce the over 200 abducted Chibok girls in Borno State and also bring an end to the Boko Haram insurgency, saying that failure to do so amounts to him being deemed unfit to seek re-election in 2015.

The Northern Elders noted that the warning became imperative because they were of the firm belief that the lingering terrorist attacks and other related security challenges in the country pose a major threat to the 2015 elections and the survival of Nigeria as a nation.

Court Orders Detention Of Former AGF Adoke For Another 14 Days