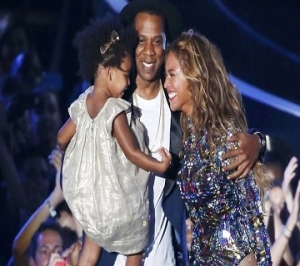 Beyonce closed the MTV Video Music Awards’ Sunday night with an epic nearly 20-minute performance, with tears streaming down her face as she was joined onstage by her beaming husband and daughter.

Before she accepted the award, the 32-year-old pop diva shared a very public onstage kiss with her husband and the family hugged it out for a few seconds on stage.

Beyonce sang and danced on Sunday in a metallic leotard while Blue Ivy and Jay Z watched from their seats as the diva declared: “MTV, welcome to my world.”

The pair had been dogged by speculation of a tumultuous relationship and rumours of divorce. Several tabloid reports suggest that the couple’s “On the Run” tour isn’t full of marital bliss and the pair have had a rocky go the last few months. But with a public lip-lock from the notoriously PDA-averse couple, things seem to be just fine between the two.

As Beyonce accepted the Michael Jackson Video Vanguard award, the VMA’s version of a lifetime achievement award, at The Forum in Inglewood, California, she kissed her daughter and husband Jay Z, who called her the “greatest living entertainer”. The duo won best collaboration for the hit Drunk In Love.

“I have nothing to say but I am filled with so much gratitude,” she told the cheering crowd as they chanted her name repeatedly.

Her performance easily outdid her competition throughout the night, though Beyonce lost video of the year, which instead went to Miley Cyrus, who let a homeless man accept her award. It was in sharp contrast to the 2013 VMAs, when Cyrus twerked and danced shockingly onstage.