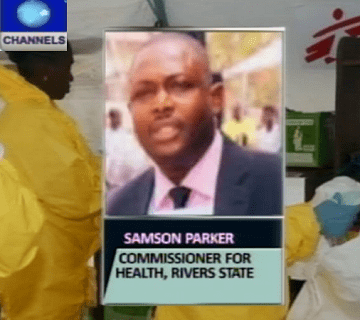 The Commissioner for Health Rivers State, Samson Parker, has said that the wife of the doctor who died in Port Harcourt after contracting the Ebola Virus Disease, has tested positive and has been transferred to Lagos for treatment.

He said that about 200 people have been traced and put under surveillance, “anyone of them that shows traces will be tested and quarantined, but so far no one has shown traces”

Speaking via the telephone on Channels Television’s Saturday Sunrise, the Commissioner said that the two cases that were confirmed in the state were the late doctor and his wife.

He noted that his team was carrying out a robust search to find people who have had primary contacts with the affected persons (including the immediate family) in the state and other close states.

The Commissioner also stated that the hospital owned by the late doctor has been deactivated and decontaminated, likewise the mortuary where his body was taken to. “After the decontamination, we will announce to the public that this is what happened and the hospital ceases to operate.”

He also mentioned that health workers from within and outside the country are helping to observe these contacts.