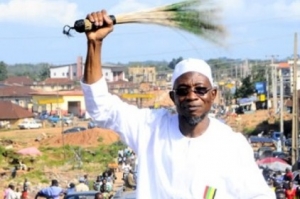 The Osun State Chapter of the All Progressives Congress (APC) has filed a reply to the petition filed by the Governorship Candidate of the Accord Party, Niyi Owolade, seeking the nullification ‎of the result of the Osun governorship election.

The election, held on August 9, was won by the incumbent Governor, Rauf Aregbesola.

But the Accord party is asking the court to look into the result of the election which, according to the petition, was not free and Fair.

Addressing reporters at the state High Court in Osogbo, lead counsel to the APC, Mr Kunle Adegoke said the APC was presenting 30 witnesses to prove that in most parts of the state the election was free and fair.

The Accord Party’s 17-page petition contains only 14 witnesses to prove that the election was rigged in 30 local governments.

Mr Adegoke said the petition lacked the basic requirements that must be met by a petitioner, stressing that the removal of Justice I.M. Bako, the former chairman of the Osun Election Petition Tribunal, ought to have been carried out with recourse to some other parties involved in the petition.

Osun Pensioners In Fresh Protest Over Non-Payment Of Entitlement