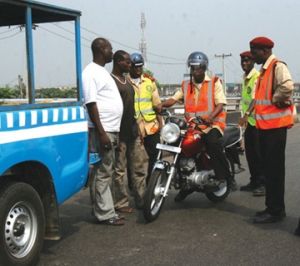 Commercial drivers and private vehicle owners in Kaduna State have decried the activities of officials of the Federal Road Safety Corps (FRSC) in most parts of the state, describing them as extortionists.

The motorists, who spoke to Channels Television Correspondent described as appalling, a situation whereby after struggling to buy fuel into their vehicles and maintaining them, Road Safety officials would always intercept and extort money from them on account of one offence or the other.

According to them, even when all the vehicle particulars and other requirements are complete, they still asked or looked for a fault in order to detain the vehicle in order for the driver to part with some of his day’s earning.

Amongst its functions, according to the edict that established the Federal Road Safety Corp, was traffic law enforcement and patrols on the highways, clearing of obstructions and providing assistance to stranded road users on journeys, aggressive and coordinated public education, awareness and enlightenment on friendly use of the roads by motorists and other road users as well as rescue operations and providing first aid to accident victims on the road.

While there were those who believe the Road Safety officials are doing their best in terms of accident reduction and sanity on the roads, some motorists insisted that the they had no business operating within Kaduna metropolis.

They alleged that instead of mounting checks on the federal highways, the FRSC officials position themselves on rural roads where they collect money from drivers.

When contacted, the Kaduna State FRSC Sector Commander, Olumide Olagunju, said that he was aware of such misconduct among some of his men, but stressed that officers who were caught in the act of extortion and other corrupt behaviours have been made to face disciplinary actions.

On whether his men have the right to check motorists on Local Government and state roads, the Corps Commander said that his men had powers to operate at all the streets and roads in Kaduna.

Although accusations such as this have always been meted to other security agencies like the Police, Customs and others, it is expected that the Road Safety authorities would take the allegations very seriously by ensuring that all corrupt officers are punished accordingly, while at the same time making traffic offenders to face the law.