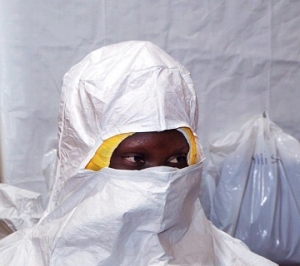 Four people close to the first person diagnosed with Ebola in the United States were quarantined in a Dallas apartment, where sheets and other items used by the man were sealed in plastic bags, as health officials widened their search for others who had direct or indirect contact with him.

In Liberia, an American freelance television cameraman working for NBC News in Liberia has contracted Ebola, the fifth U.S. citizen known to be infected with the deadly virus that has killed at least 3,300 people in the current outbreak in West Africa.

The 33-year-old man, whose name was not released, will be flown back to the United States for treatment, the network said on Thursday.

Immediately after beginning to feel ill and discovering he was running a slight fever, the cameraman quarantined himself. He then went to a Doctors Without Borders treatment centre and 12 hours later learned he tested positive for Ebola.

The entire NBC crew will fly back to the United States on a private charter plane and will place themselves under quarantine for 21 days, the maximum incubation period for Ebola.

U.S. health officials said they were confident they could prevent the spread of Ebola in the United States after the first case was diagnosed this week on U.S. soil.

Up to 100 people had direct or indirect contact with Thomas Eric Duncan, a Liberian citizen, and a handful were being monitored, said Dr. Thomas Frieden, director of the U.S. Centers for Disease Control and Prevention (CDC).

None of those thought to have had contact with Duncan were showing symptoms of Ebola, Dallas County officials said at a news conference.

Duncan had helped a pregnant woman who later died of Ebola in Liberia, just days before flying to Texas via Brussels and Washington two weeks ago. Duncan had been staying in an apartment in the northeastern part of the city for about a week before going to a Dallas hospital.

In Liberia, the head of the country’s airport authority, Binyah Kesselly, said the government could prosecute Duncan for denying he had contact with someone who was eventually diagnosed with Ebola.

The government said Duncan failed to declare that he helped neighbor Marthalene Williams after she fell critically ill on Sept. 15. Williams died.

Kesselly said Duncan was asked in a questionnaire whether he had come in contact with any Ebola victim or was showing any symptoms. “To all of these questions, Mr. Duncan answered ‘no,'” Kesselly said.

Ebola can cause fever, bleeding, vomiting and diarrhea and spreads through contact with bodily fluids such as blood or saliva. Duncan’s case put U.S. health authorities and the public on alert over concern for the potential of the virus to spread from Liberia and two other impoverished West African countries, Guinea and Sierra Leone.