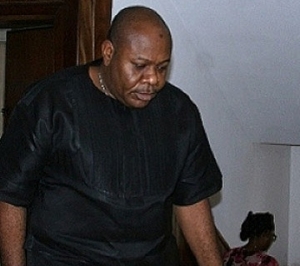 Ajudua was brought before the court by the Economic Financial Crimes Commission (EFCC) in 2003 and was standing trial alongside one Alex Okorie.

The EFCC had alleged that the defendants deceived the victims by claiming that the money was for sundry payments to various government officials.

The EFCC further alleged that the defendants claimed that the payments would help them to facilitate a contract worth $18 million on behalf of the complainants.

The matter had suffered a series of adjournments owing to the failure of the EFCC to produce some key foreign witnesses in the matter.

While the matter lasted, Ajudua, who is said to have been critically ill, was refused bail by the court.

At Wednesday’s proceeding, the EFCC again failed to produce any of the foreign witnesses in the matter.

Counsel to the EFCC, Mrs E.A Sanusi, told the court that some of the principal witnesses in the matter had vehemently refused to come to Nigerian to give evidence in the matter citing the recent outbreak of Ebola in the country.

She said that in the circumstance, the EFCC had no other option but to ask for the withdrawal of the charge.

Following this submission, Justice Kudirat Ajose subsequently ordered that Ajudua be discharged of the charges.

However, Mr Ajudua cannot go home yet, as he has been returned to prison,  because of another charge of allegedly defrauding Former Chief of Army Staff, Gen Ishaya Bamaiyi, of $8.4m while they were both in custody at Kirikiri Prison in Lagos between November 2004 and June 2005, is still pending before Justice Oluwatoyin Ipaye of the same Lagos court.

That charge is pending before Justice Oluwatoyin Ipaye and Mr Ajudua is currently at the Court of appeal challenging the refusal of the judge to grant him bail on those charges.