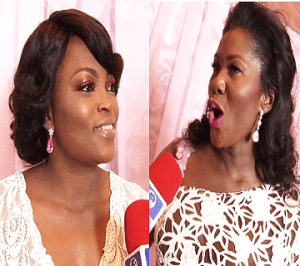 Nollywood super stars, Funke Akindele – who rose to unending fame after her “Jenifa” movies hit screens nationwide and Stephanie Linus, who has been a screen diva for many years, are both working on new projects.

Funke Akindele, who attended the Genevieve Pink Ball fundraiser over the weekend, stunned in a Jovani earth-tone dress, with pink accessories to fit the “pink” theme of the party.

Asked what fans should expect as 2014 winds down, Funke Akindele dished about her new TV series, called “Jenifa’s Diary”, which has started filming. So for fans expecting another Jenifa movie, sorry!

“The Reality Show is just in pre-production” she said, adding that fans should expect a new movie by December.

As far as we know, the movie would speak against stigmatisation of those living with HIV/AIDS.

Meanwhile, Stephanie Linus, who had a dream location wedding in 2012 and never fails to gush about her husband, is out for young couples and wants to help them “have a fabulous time with one another”, with her own show.

If you guessed that “Make Me Fabulous” would be a great name for the show, you guessed right!

Her movie, Dry, will also go through a private screening in Wales, United Kingdom and should be released soon.

Asides that, Stephanie is working on a few movie projects, which are still under wraps, as well as a perfume line.

COVID-19 Vaccination: We Will Ensure HIV/AIDS Patients Are Given Priority, Says NACA