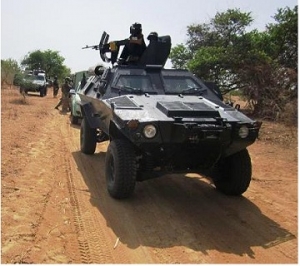 “Insurgents operating among the warring tribes of Nasarawa state get mobilisation fee of N3,000 naira to rain terror across communities in the state.”

Commanding officer of the 177 guards brigade, Keffi, Colonel Musa Ibrahim, revealed the intelligence report when he led the governor of Nasarawa state and other security agencies through 13 communities affected in the on-going killings in the state.

In recent times, rural communities of Adogi, Ashangwa, Gidan Gambo and Assakio, all along the lafia shendam road have been attacked by militia forces.

During an impact assessment by Governor Al-makura, Colonel Ibrahim while filling in the governor on the strategies adopted by the insurgents, also noted that looting, killing and rape had also been employed by the assailants in their destruction and vendetta.

Governor Al-makura who arrived Assakio through several villages that had been burnt to the ground in company of security agents.

The impact assessment tour saw the governor and his team move through rural path used by the insurgents to cross from Assakio to Obi where communities like Sabo Gida, Lega-Obi, Tudun Adabu and Daddere were also troubled.

One of the concerns raised was the near security absence in some of the communities which the governor admitted, that there was inadequate personnel to provide security services round the clock.

#SARSMUSTEND: Youths Have Been Taken For Granted In The Past, Says Gov Abiodun