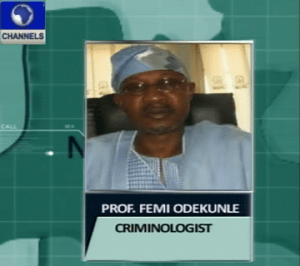 A criminologist, Femi Odekunle has challenged  the Federal Government to tackle the prolonged issue of insurgency disturbing the country fast.

This is following the recent attack on the students of the Government Senior Science, Secondary Sch, Potiskum, Yobe state.

Mr. Odekunle stated that if the government does not take immediate measure in tackling these insurgency, such incident may occur again.

Speaking as a guest on Channels Television’s Sunrise Daily, Mr. Odekunle mentioned that some international bodies might have a hand in the attacks, adding that Adamawa used to be part of Cameroon and Chad is also close to the borders.

Mr. Odekunle also noted that the “government should have declared total war so that Nigerians and the world will know that Nigeria is at war, this should have been done two years ago”.

He expressed dissatisfaction at the government’s effort in fighting insurgency, and questioned if the borders are properly monitored.

Mr. Odekunle advised the government to put as much effort and resources it has used in the forth coming 2015 general elections to stop the menace and to give adequate backing to the military, by providing them with equipments in fighting the war.