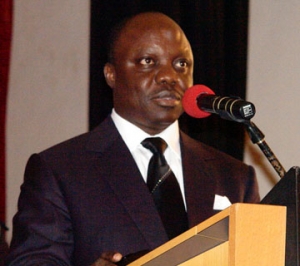 Governorship aspirants in Delta State have been told to desist from engaging in divisive actions that are capable of breaching the peace of the state and urged them to be truthful.

The Governor of the state, Dr. Emmanuel Uduaghan, gave the admonition in Asaba during the swearing-in ceremony of the elected Chairmen of Ndokwa East and Ethiope East local government councils, Mrs Nkechi Chukwurah and Mrs Faith Majemite respectively.

Dr. Uduaghan pointed out that during the Ward congresses, there were meetings with the governorship aspirants, where every aspirant and leader contributed to the emergence of the delegates through a consensus list, which they signed and applauded the free and fair nature of the congress that brought up the delegates list.

The governor urged the newly sworn-in chairmen to concentrate on the area of security, payment of staff salaries and ensure that they engage in progressive projects in their local government areas, noting that women are doing well in the politics of Delta State.

Later, at a meeting attended by leaders of People Democratic Party, the governor declared his ambition to run for the Delta South Senatorial District.

Meanwhile,the leaders of the party has elected Chief Edwin Uzor as the acting chairman of the party.

The highpoint of the meeting was the motion moved by the former state chairman, Mr Peter Nwaoboshi for the retention of the Ward delegates list without alterations as prepared by the elders and leaders of the party. This was seconded by the majority leader of the State House of Assembly, Mr Hob Igbuya.

Twitter’s Decision To Locate HQ In Ghana Is A ‘No Issue,’ Says Ruling APC