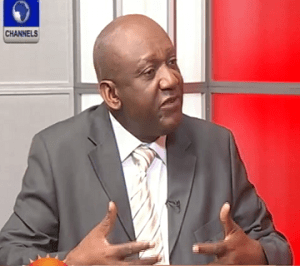 A professor at the Pan Atlantic University, Austin Nweze, has asked citizens to brace up for the impact of the decision taken by the Central Bank of Nigeria to devaluate the naira and increase interest rate, noting that this would affect businesses and ultimately, job creation.

While shedding light on the implications of the CBN’s action, Nweze stressed that business owners should expect to pay up to 30 percent interest rates if they obtain loans from the banks and since entrepreneurs are the major job creators in any thriving economy, it will discourage them from expanding their ventures. Hence, unemployment rate will not reduce.

Asides from the impediment to business growth, citizens should also expect high cost of goods and services because of the structure of the economy, Nwaeze said, noting that “Nigeria’s economy is import dependent”.

“The domestic production is below 4 percent as manufacturing contributes less than four percent to the GDP”.

He also warned that an increase in fuel price should be expected in 2015, insisting that the proposed austerity measures to combat the slump in global oil price should start with the government.

What he described as the ‘unholy trinity’ including the interest, foreign exchange and inflation rates would be affected as well because “as you’re fighting inflation, the interest rate has a way of influencing the whole economy.

He noted that there had always been the danger of depending on oil as the nation’s major stream of income, adding that “I thought that we would have learned from the past experience because this is not the first time it has happened.

“When Soludo was CBN governor, this kind of thing happened. There was not enough dollar to finance the budget. He had to devalue.”

This led to some people becoming naira billionaires by reason of exchanging dollars they had previously stacked up, Nweze said, adding that the same thing has happened again.

He insisted that it was time for Nigeria to restructure its economy away from oil, noting that as at 2008, the United Arab Emirates had only five percent contribution from the oil sector to the GDP but Nigeria has over 90 percent.

On the CBN’s action to counter the effects by devaluing the naira and raising interest rates, Nweze supported critics who have said it is not a good mix.

He stressed that a 13 percent interest rate will have severe impact on businesses and this would in turn affect job creation on the part of entrepreneurs.

Commenting on the CBN’s explanation that the action was taken to curb frivolous demands of the dollar, Nweze noted that the demand for dollar would be on the increase by high class citizens who would want to be able to leave the country in case of any crisis, as the election year draws near.

“Most rick men who don’t have confidence in this country are staking up dollars”, he said.

There’s A Lot Of Suffering In The Land – Obadiah