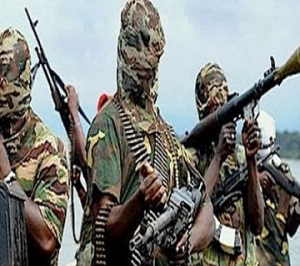 The Federal Government of Nigeria says it is definitely collapsing the Boko Haram insurgent’s networks, bridging insecurity and also having its eyes on fifth columnist in the country.

It also guaranteed that elections will be conducted in all parts of the country including the North East as it has already liberated a large portion of the area.

The assurance came in the aftermath of a breakfast meeting hosted by President Goodluck Jonathan with the Chief of Defence Staff, Alex Badeh and other Service Chiefs who were in attendance.

Badeh, who spoke to journalists at the end of the forum outside the President’s residence, said “life is gradually coming back in the areas earlier ravaged by the insurgents including Mubi, Adamawa State”.

He also stated that the Department of State Services is already handling the issues bordering on fake Boko Haram negotiators and fifth columnists aggravating the crisis, with a guarantee that the government would deal with them appropriately.

The Chief of Defence Staff further said the armed forces was very firm and are strategizing to ensure that insecurity in the north-east was  brought under control.

He did not mention the strategies that the military is adopting in its counter terrorism operation that has been on for over five years.

As A Nation, We Cannot Afford To Fail This New Year – GEJ