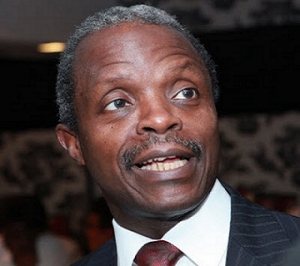 The Peoples Democratic Party (PDP) has described the choice of Professor Yemi Osinbajo by General Muhammadu Buhari as his running mate in the 2015 presidential election as ‘belated and the height of incompetence’.

Professor Osinbajo was chosen on Wednesday, six days after the emergence of General Buhari as the Presidential candidate, the party pointed out.

The PDP also declared that the eventual choice of Osinbajo was a confirmation of its stand that the All Progressive Congress was the personal project of a cabal commanded by former Lagos State governor, Bola Tinubu, to expand its political and economic frontiers.

In a statement by a PDP spokesman, Olisa Metuh, on Wednesday, the party said: “should power get to this cabal, who is desperate to control the political and economic power centre of the nation, then Nigeria is finished”.

“By the choice of Osibajo, a well known acolyte of Tinubu, who served under him as Attorney-General and Commissioner for Justice, the APC, General Buhari and Tinubu have boldly recreated their well-known notoriety for sectional and personal interests.

“It is particularly worrisome that General Buhari has surrendered his first official responsibility of choosing a running mate, invariably his powers to Tinubu even before he goes to the field to ask for votes.

“This is not surprising of Buhari, who has consistently exhibited a track record of incompetence. This is the same man who as military head of state surrendered all his powers to his second in command. The story of his headship of the Petroleum Trust Fund (PTF) is not different, as he also got lost before the flurry of portfolios of paid consultants.

The statement further stated that the “whimsical interference in the choice of candidates for his party not only muddled up the process but ended up creating an electoral malfeasance and confusion that eased out federal lawmakers elected on the platform of the CPC from his native Katsina state”.

“Our citizens should indeed be concerned about this: that it took the APC, six days to produce its vice presidential candidate and that the founder and funder of the party, Tinubu, as always, had his way. No doubt, this is how Tinubu is going to impose his mercantilist interest on major decisions affecting the entire country.

“Fortunately, the PDP offers to all Nigerians a truly national party and a Jonathan/Sambo ticket ready to build a better tomorrow.

“In PDP, the focus remains to ensure that we continue to deliver on our promises and put the interests of Nigerians first in all our party decisions and policies of our government.”

Be Courageous To Handover Power In 2023, Wike Tells APC