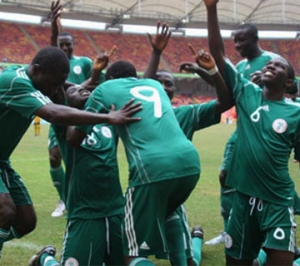 Nigeria’s U-20 team, Flying Eagles, recorded yet another big win against Nigeria Nationwide Division 3 side, Highlanders of Kaduna, when they trounced them 10-0 in a final test game on Friday before embarking on their Christmas holidays.

Both teams also missed a penalty each with a Highlanders player sent off after 59 minutes.

But it was Highlanders who first stunned their opponents after just five minutes of action when they struck the crossbar.

Musa Muhammed doubled the lead of the Flying Eagles in the 20th minute off a low cross by fellow fullback Mustapha Abdullahi.

Billy Auta made 3-0 in the 28th minute, before skipper Muhammed again hit target on 50 minutes via a superb free kick.

Mathias netted the Flying Eagles fifth goal after 63 minutes, when he toe-poked his effort home.

Giwa FC goalkeeper Olorunleke Ojo saved a penalty awarded Highlanders in the 78th minute, before fullback Mustapha Abdullahi continued his rich vein of form in front of goal with a sixth goal for the Nigeria U20s when he capitalised on a defensive blunder.

In 85th minute, Abdullahi Alfa missed a penalty after the goalkeeper fouled a goal-bound Mathias.

The Flying Eagles will now regroup for a second phase of training camp on December 27.

The U-20 team resumed camping in Kaduna on November 30 with mainly home based players.

The Head Coach, Manu Garba, said that about 8 foreign players are expected to join the team when the players return from the Christmas holiday on December 28.

Garba has already reeled out a list of 30 players to begin a screening exercise for the fast approaching tournament billed for Senegal.

The 30 players called up are made up of the core of the squad that qualified the team for the 2015 AYC in Senegal from March and several players from the Nigeria Premier League.

Speaking to Channels Television shortly after the match, Coach Garba expressed satisfaction with the performance of the players, but added that a lot of work needed to be done in the defence and midfield.