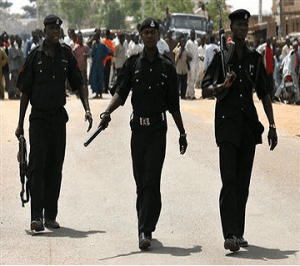 The Police and other Security agencies in Kaduna State have deployed more men to motor parks and other strategic areas in the state ahead of the Christmas and New Year holiday to ensure a hitch-free celebration.

The Kaduna State Police command said that they had made adequate arrangements to ensure that public places, including churches, markets and recreational centres were well secured during the period.

The Kaduna State Police Command spokesman, Aminu Lawan, said in a statement that the command, in collaboration with other security agencies in the state, had designed measures to ensure the safety of residents and motorists at all parts of the state during the period.

He called on the public to be vigilant and also put security measures in place in their places of worship during the Christmas service in view of the current security situation in the north.

To forestall any breakdown of law and order at motor parks, passengers were subjected to thorough security checks on their vehicles and luggage by officials of the National Union of Road Transport Workers (NURTW).

This measure, according to the Union’s Chairman, is to ensure that the security of passengers is guaranteed at the motor park and to avoid attack by terrorists.

Channels Television’s correspondent went round the state capital and reports that policemen were deployed to all major streets and roads while officials of the Federal Road Safety Corps were also on ground to maintain orderliness on the roads.

On their part, the passengers traveling to different parts of the country, complained increase in transportation fares which they said had doubled due to the Christmas celebration.

Commercial drivers blamed the increase on the scarcity of fuel in the state. In the state capital, only few petrol stations were seen selling fuel to motorists despite the suspension of the three day warning strike by oil workers.

There were, long queues at petrol stations where the product is available. This has significantly affected the movement of people within and outside the state.

However, the spokesman for the North-West Zonal office of Department of Petroleum Resources (DPR), Rabiu Bello , told Channels Television, shortly after inspecting some petrol stations within the metropolis, that there was enough fuel to serve motorists during and after the Christmas and New Year celebrations.

He disclosed that 94 trucks of PMS had been deployed to the state on Monday while more were expected. He also said that the agency had sealed three petrol stations for diversion of PMS and warned that the agency would not hesitate to sanction any marketer found indulging in an unwholesome practice.