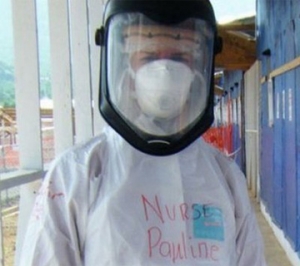 Liberians got a chance to interact better on December 31st as authorities in the country lifted the curfew imposed to curb the spread of Ebola so that people could attend New Year’s Eve church services.

The United Nations’ health agency did not comment directly on the one-night suspension but called for authorities to keep up “social distancing” measures and encourage people to avoid large gatherings.

Liberia introduced the curfew in September at the height of an epidemic that has killed more than 3,400 people inside its borders and at least 4,400 more in Sierra Leone and Guinea, according to figures from the World Health Organization.

The virus, which causes vomiting, diarrhea and bleeding, is spread by contact with the bodily fluids. It has no known cure.

Churches that held services observed measures to prevent the spread of Ebola such as hand washing, temperature testing and avoiding over-crowding on

The midnight to 6 a.m. curfew was reimposed the following night.

Meanwhile, Medecins Sans Frontieres, a medical charity that has been at the forefront in the fight against Ebola in West Africa, has warned of complacency in Liberia.

“Whilst progress has been made, it is of great concern to everyone at MSF that the population is now much less vigilant about Ebola and health promotion messages are being pushed aside,” said MSF field communications coordinator Caitlin Ryan.

The rate of new cases has slowed in Liberia and health officials say the next phase of the fight against the virus will involve deploying teams of health workers to identify chains of infection.