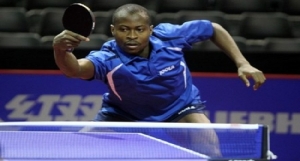 “I think we communicated a great deal during the match and we did not allow them to attack”, said Ojo Onaolapo. “I just told my partner not to be under pressure and ensure he put the ball on the table because I realised that they cannot cope with my topspin play; we were very focused.”

According to Kazeem Makanjuola: “Before the competition, I had said I want to come and beat the Egyptians and thank God it has become a reality”.

It was a fine effort but of course he had very good support; his partner has stunned the world in the past six months.

“Quadri Aruna told me to play short whenever possible and see what comes next; I did that and it worked well”, added Makanjuola Kazeem. “I am so happy that we were able to break the Egyptians dominance of the competition in this doubles and we hope for more in the singles.”

“I think we played better after we won the first game; they started to raise their game and we lost concentration, after being two-nil ahead”, said Dina Meshref. “We figured out that they were rushing us, we slowed down the game and this gave us an edge to win.”