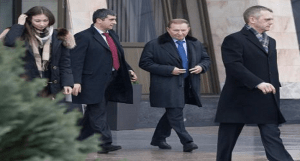 A new round of peace talks got under way involving Ukraine and separatists on Saturday, even as fighting between Kiev government forces and the Russian-backed rebels raged in Ukraine’s east, claiming civilian and military lives.

The main members of the so-called ‘contact group’ — Ukrainian former president Leonid Kuchma, a Russian diplomat and an Organization for Security and Cooperation in Europe official – met at a state residence in the Belarussian capital Minsk, where they were joined by two separatist officials.

The sides have held only one inconclusive meeting since agreeing a ceasefire last September as part of a 12-point blueprint for peace. Much-violated from the start, that truce collapsed completely with a new rebel advance last week.

Both sides have accused each other of deadly artillery and mortar strikes on civilian targets in the past two weeks, including on a cultural center in the main regional city of Donetsk on Friday which killed at least five people waiting for humanitarian hand-outs.

The September Minsk peace plan also called for tighter control of the joint Russia-Ukraine border, through which Kiev says Moscow is funneling fighters and equipment, and the freeing of prisoners held by the sides.

Much has changed on the ground, however, since September.

The separatists have set up self-proclaimed ‘people’s republics’ while their forces, which Kiev says are supported by 9,000 Russian regular troops, have seized more than 500 square km (193 square miles) of territory beyond that agreed in the Minsk talks and threaten to seize control of the east’s two main regions entirely.