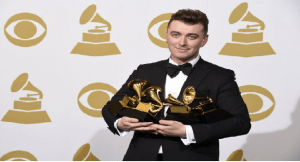 The 57th Annual Grammy Awards delivered many memorable moments as series of entertaining events took the crowd. There were standout performances and signature GRAMMY Moments to the poignant acceptance speeches.

Sam Smith won the first four GRAMMYs in his career. Beck took home the prestigious award for Album Of The Year for Morning Phase. Other big winners include Beyoncé, Rosanne Cash and Pharrell Williams, who won three GRAMMYs each.

British soul singer, Sam Smith, bagged four Grammy Awards in the US, including the prestigious prizes for Record and Song of the Year and Best New Artist.
Smith was rewarded for being the only solo artist to sell more than a million albums in both the UK and US in 2014.

Madonna, Katy Perry, Rihanna, Kanye West and Sir Paul McCartney were among those who performed at the Los Angeles ceremony.

The night belonged to Sam Smith, who has occupied his place as one of pop’s biggest stars just nine months after the release of his debut album In the Lonely Hour.

Sam Smith said: “Before I made this record, I was doing everything to try to get my music heard… I tried to lose weight and I was making awful music. It was when I started to be myself that the music flowed.”

Smith’s ballad, ‘Stay With Me’ won both Song of the Year and Record of the Year – the former recognizes the songwriters, while the latter goes to the performer and producer.
Accepting the record of the year trophy, he said: “I want to thank the man who this record is about, who I fell in love with last year.

“Thank you so much for breaking my heart because you got me four Grammys,” he said.

Smith also performed the song on stage with Mary J Blige; while his other awards were Best New Artist and Best Pop Vocal Album.

“We made this record at my house for the most part, so I would like to thank my kids for letting me keep them awake a little bit longer,” he said.

The other triple winner, Rosanne Cash, picked up the best American roots performance and song awards for A Feather’s Not A Bird and Best American Album.

Ed Sheeran, who had three nominations, went home empty-handed, but did join ELO’s Jeff Lynne on stage to perform at the ceremony.

Other performers on the night included Sir Paul McCartney, Kanye West and Rihanna, who teamed up to play their joint composition Four-Five Seconds.

Madonna was joined by half-naked male dancers wearing glittering masks and horns to perform Living For Love, from her new album Rebel Heart.

There were also duets between Jessie J and Sir Tom Jones; Hozier and Annie Lennox; and Lady Gaga and Tony Bennett.

The ceremony digressed from pure entertainment for a segment in which US President Barack Obama sent a recorded video message in support of a campaign against domestic violence.

Domestic abuse survivor Brooke Axtell then delivered a poignant message about how a seemingly “handsome, charismatic man” had threatened to kill her.