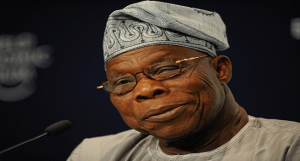 Following his announcement, Obasanjo asked that his PDP membership ID card be torn by the Chairman of his ward 11 Ita-Eko, Sumonu Oladunjoye.

Speaking to journalists in Abeokuta, the Ogun State capital, he further maintained that he isn’t prepared to join another political party, as he wishes to remain an elder statesman.

Chief  Obasanjo, had recently been vocal about the  forthcoming presidential elections, as well as the candidate he will support.

At the launch of his new book ‘My Watch’ in the United Kingdom, Obasanjo responded to questions on reports that he had endorsed the presidential candidate of the APC, General Muhammadu Buhari, maintaining that his wish is to see Nigeria headed by a strong president.

“Well, whatever you get in the paper and in the press, please yourself,” he said to guests at the event, who wanted to confirm the reported endorsement.

“What I said, I maintain that I will say it again and I will do it. When the time comes for me to vote, I will consider the track record of all the candidates that are contesting and I will assess; based on my own assessment for who I believe have the best track record to perform the job of the Nigerian President, then he will have my vote.

He added, “If anybody should know what the job of the Nigerian President requires, I should know.”

Obasanjo, who is also a retired Army General, added that, “Nigeria has a population of 180 million and you wouldn’t have anybody other than one person or two persons that can run the affairs of Nigeria? What the hell are we talking about?

“For me, there are millions who can run the affairs of Nigeria who are not even coming out. So why should you die on behalf of one who is probably performing as a mediocre? With all due respect.

He recently fell out with the incumbent president, Goodluck Jonathan and the PDP, making him to make statements, which to many could at best be from the opposition.

Obasanjo further accused the President of forcing the elections postponement on the INEC, a situation he said was designed to make him win by all means possible.

The former president, who was the nation’s military leader from 13 February 1976 to 1 October 1979 and a democratically elected president from 29 May 1999 to 29 May 2007, further expressed pessimism on the possibilities of achieving success in the ongoing fight against Boko Haram by the Nigerian military and other allied forces.

He urged the leadership of the ruling Peoples Democratic Party (PDP) and the All Progressives Party (APC) to ensure that the nation’s democracy remains intact.

The Presidency has however faulted these comments through a statement by the Special Adviser to the President on Media and Publicity, Dr. Reuben Abati made Government’s position known on his website.

Dr. Abati said that the former president’s comments are odious and repugnant.

According to Dr. Abati, it is obvious that Chief Obasanjo has willfully chosen to close his eyes to the present administration’s good works and intentions, and that for reasons best known to him, Chief Obasanjo has set his mind on regime change by fair or foul means.

The President’s Spokesman said “For the record, President Jonathan has no such intention and will continue to give the greatest possible support to the Independent National Electoral Commission (INEC) and other relevant federal agencies to ensure that the rescheduled elections are successfully conducted”

Dr. Abati went on to say, “It is not President Jonathan who remains faithful to his oath of office, who is trying to plunge Nigeria into crisis, but Chief Obasanjo, who is scheming to plunge the country into chaos in pursuit of a selfish and highly egocentric agenda”

The President’s spokesman alleged that Chief Obasanjo’s plot with others within and outside the country to thwart the general elections and foist an unconstitutional interim national government, which he hopes to heap on the nation is well known to the Federal Government.

Dr. Abati added that as President Jonathan has also assured the nation, the rescheduling of the general elections was in the best interest of the nation and was never driven by any ulterior motive on the part of government as Chief Obasanjo and others have alleged.

Three Dead As Bus Plunges Into River In Ogun