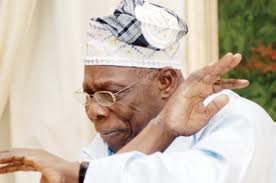 The campaign council of All Progressives Congress governorship candidate in Kaduna State, Mallam Nasir El-Rufai, have described the dumping of the Peoples Democratic Party (PDP) by former President Olusegun Obasanjo, as a boost to the fortunes of the opposition party in the rescheduled March 28 and April 11 elections in the country.

Addressing journalists at the APC secretariat in Kaduna, Chairman of the campaign council, Mr Suleiman Hunkuyi, noted that whatever reasons that made the former president to dump the ruling party, on which he rode to power for eight years, should be a source of concern to Nigerians.

He noted that if Obasanjo, a highly respected figure in Nigeria and across the globe, should dump his party, it is a plus for the APC.

The campaign council also said that it would soon embark on a statewide campaign to sensitize the people to collect their Permanent Voter Cards (PVCs) ahead of the rescheduled elections.

Though, Kaduna is among the states with the highest PVC collection rate so far, Hunkuyi noted that the council would not rest on its oars until those who are yet to pick up the PVCs do so.

On some inciting advertorials against the APC in Kaduna State, Hunkuyi, who served as Commissioner for Finance under the PDP government, called on politicians to dwell on issues and not frivolities.

He also expressed concern over the attacks on APC members and supporters in the state, adding that the party had started compiling some of the cases and would soon petition the Inspector-General of Police on the matter.