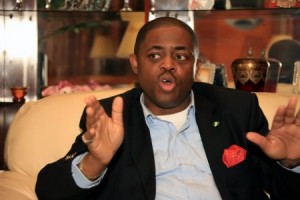 The spokesman for the Peoples Democratic Party Presidential Campaign Organisation, Mr Femi Fani-Kayode, has demanded for five billion Naira from the spokesman of the All Progressives Congress, Mr Lai Mohammed, as damages for a ‘defamatory publication’.

A solicitor to Mr Femi Fani-Kayode,  Mr Ahmed Raji, who made the demand on Tuesday, also asked Mr Mohammed to withdraw the statement made on its client’s mental state and published on the Nation Newspaper.

In a letter written to Mr Lai Mohammed, signed by Whyte Prokunomaa, the Firm noted that Mr Fani-Kayode denied in its entirety, the contents of the publication.

The firm stated further that every allegation against Mr Fani-Kayode in the said publication was false and defamatory of his person and character.

Mr Mohammed in a statement in Dubai, stressed that the APC had never and would never wish anyone ill-health.

He said: “No! We have never and will never wish anyone any ill-health.

“However, we are seriously concerned that Mr Fani-Kayode may have unhinged, perhaps as a result of a relapse into an unhealthy lifestyle of substance abuse.

“Our concern stems from the series of incoherent behaviours exhibited by Mr Fani-Kayode in recent times, which call into question his state of mental health.”

However, Mr Fani-Kayode’ solicitor demanded that Mr Mohammed should withdraw the said statement and render an apology to its client within seven days of the receipt of the request.

It also noted that the APC’s National Publicity Secretary was expected to enter into negotiation for damages, stating that it had firm instructions to claim five Billion Naira damages against him.

Meanwhile, the vice presidential candidate of the All Progressives Congress, Mr Yemi Osinbajo, has issued a seven-day ultimatum to Mr Fani-Kayode to apologise over “defamatory statements” against him.

In a letter dated February 28 and addressed to Mr Fani-Kayode, who is the Director of Media and Publicity of the Peoples’ Democratic Party Presidential Campaign Organisation, Mr Osinbajo demanded for two billion Naira as damages.

He also demanded for an immediate retraction of the “offensive and derogatory” publication and an apology on four Television channels and national newspapers.