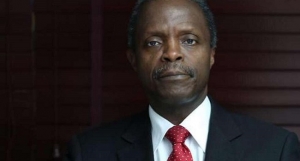 The vice presidential candidate of the All Progressives Congress, Mr Yemi Osinbajo, has issued a seven-day ultimatum to Mr Femi Fani-Kayode to apologise over “defamatory statements” against him.

In a letter dated February 28 and addressed to Mr Fani-Kayode, who is the Director of Media and Publicity of the Peoples’ Democratic Party Presidential Campaign Organisation, Mr Osinbajo demanded for two billion Naira as damages.

He also demanded for an immediate retraction of the “offensive and derogatory” publication and an apology on four Television channels and national newspapers.

“Be advised that if we do not receive your formal retraction and apology and damages as demanded within seven days of receipt hereof, we shall proceed with our client’s instructions to seek appropriate legal remedies for your publication and dissemination of defamatory statements,” Mr Osinbajo wrote, through his lawyer, Mr Femi Falana, also a senior advocate.

Mr Fani-Kayode, a lawyer, had on February 28, convened a press conference in Abuja, where he alleged that the APC’s vice presidential candidate had sworn an oath to vacate his seat should the party win the forthcoming election.

According to Mr Fani-Kayode, Senator Bola Tinubu, the APC’s National Leader, had nominated Mr Osinbajo as part of “plans to come to power through the back door”.

“Tinubu, according to our information, has compelled Osinbajo to swear to an oath that after six months in office, he would resign as the vice president, in the unlikely event that their party wins,” Mr Fani-Kayode said while addressing the press.

“The wicked plot, as laid out by them, is to force Osinbajo to resign for Tinubu to be nominated by Buhari as his replacement.”

Mr Falana said that the statement, wherein he labelled Mr Osinbajo as Mr Tinubu’s ‘stooge,’ hurt the vice presidential candidate, having been disseminated to millions of TV viewers, including on print and online media.

“As it were, the statement has now been published and circulated to an undetermined number of people in Nigeria, and internationally outside Nigeria,” Mr. Falana said.

“The direct meaning, imputation, purport and/or innuendo or insinuation of the false, misleading and defamatory statements is that: “Professor Osinbajo is deceitful. Essentially, you alleged that his motivation and pledge to serve as Vice President of Nigeria is inconsistent with his avowed desire to serve this nation with General Buhari, and work assiduously to deliver the benefits of his commitment, party and personal promises to the people”.

“Your characterisation of Professor Osinbajo as a ‘stooge’ in context suggests that he is complicit in a fraud against the Nigerian people,” he stated.

Mr Falana further said that Mr Fani-Kayode’s statements implied that his client lacked integrity and had engaged in a conduct incompatible with his faith and ethics as a pastor and respected lawyer.

“It is clear that the entire publication was a vicious, wicked and reckless ploy to impugn the reputation of our client and lower him in the estimation of right thinking members of the public,” Mr Falana added.

Meanwhile, Mr Femi Fani-Kayode, has also demanded for five billion Naira from the spokesman of the All Progressives Congress, Mr Lai Mohammed, as damages for a ‘defamatory publication’.

A solicitor to Mr Femi Fani-Kayode,  Mr Ahmed Raji, who made the demand on Tuesday, also asked Mr Mohammed to withdraw the statement made on its client’s mental state and published on the Nation Newspaper.

In a letter written to Mr Lai Mohammed, signed by Whyte Prokunomaa, the Firm noted that Mr Fani-Kayode denied in its entirety, the contents of the publication.