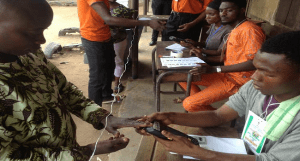 Accreditation of voters has commenced across Nigeria as citizens go to the polls to vote in the presidential and national assembly elections, the 5th quadrennial election to be held since the end of military rule in 1999.

In Lagos State, south-west Nigeria, voting materials arrived at some of the polling units early.

Channels Television correspondents, who visited polling units in Ikeja and Ifako observed that accreditation had already started. Residents at Ifako were seen queued up in orderly manner while officials of the Independent National Electoral Commission (INEC) were seen giving on final instructions on election processes.

In Cross River State, south-south Nigeria, election materials were also reported to have arrived at some of the polling units where potential voters had been waiting patiently for accreditation to begin.

In Edo State, accreditation started early and all was reported to be going orderly.

In Imo State, it was mixed reactions. While electoral materials arrived some polling centres as early as 8:00am local time, some polling units were still waiting for the arrival of INEC officials as at 9:45am.

Our correspondent in Kano, north-west Nigeria, said accreditation started early and was still going on smoothly, though there were cases of some people not being able to get accredited as the card readers failed to read their finger prints.

In Otuoke, the home town of the Nigerian President and the presidential candidate of the Peoples Democratic Party, Goodluck Jonathan, the card reader failed to recognise the finger print of the President, forcing the INEC to accredit the President with the Register.

In Kaduna State, Vice President Namadi Sambo alongside his wife, Amina, was accredited at about 11:20 am at Police College polling unit in the state capital, Kaduna. Shortly after being accredited, Mr Sambo described the process as successful and expressed optimism that the election would be free and fair.

In Ogun State, south-west Nigeria, a former president Olusegun Obasanjo, joined other eligible voters at his ward 11 polling unit in Abeokuta, the state capital, to be accredited for the elections.

Voter cards to be patient as they have another chance before the second phase of the general elections, that is the Governorship and House of Assembly polls.

In Osun State, also in south west Nigeria, the electorate began to move out as early as 6.30am to various polling units in readiness for the election.

The polling units visited in Osogbo the state capital ‎revealed the presence of INEC ad-hoc staff and a large turn out of voters waiting on the queue for the accreditation process to commence.

However, the card reader is reported to be slow in some polling units, such as Odeomu in Ayedaade Local Government Area, while in some parts in Osogbo Council, report the card readers were said not to be functioning.

The streets of Osun is relatively peaceful with security agencies on patrol.

And in Cross River State, south-south Nigeria, election materials were also reported to have arrived at some of the polling units where potential voters had been waiting patiently for accreditation to begin.

In Edo State, accreditation started early and all was reported to be going orderly.

2019: Saraki Meets With Jonathan In Abuja