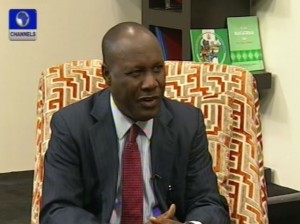 A former Minister of Niger Delta Affairs, Elder Godsday Orubebe, has apologised for the outburst he expressed on Tuesday while the collation of Nigeria’s presidential election results was on-going at the International Conference Centre (ICC), Abuja.

Mr Orubebe had accused the Chairman of the Independent National electoral Commission (INEC), Professor Attahiru Jega of being ” tribalistic, selective and partial” in dealing with issues of irregularities raised during the just-concluded presidential and National Assembly elections.

He said his action was as a result of frustration, triggered by alleged refusal of the INEC to take his party’s petition.

“My colleague came here and approached him gently about the petition and he told my colleague to go and give it to his secretary.

“We were surprised that yesterday, the secretary came and threw the paper at my colleague and the chairman said that he was not going to take the petition. So we were wondering that, in a position that we are talking about providing the best for the people of this country, what we expect from the commission is fair and equal treatment for any political party,”  Mr Orubebe said.

Hours after the announcement of the winner of the election, Mr Orube apologised on his twitter handle saying: “At ICC; the event and outburst of yesterday (Tuesday) is regrettable. Apologies to fellow Nigerians”.

Mr Orubebe has also congratulated the winner of the Presidential elections, General Muhammadu Buhari, saying the result is “victory for democracy”. His outburst came before a session of result announcement started. Before that section of collation resumed, Mr Orubebe had tweeted on his twitter handle: “We must all remain calm and peaceful as we are ready for the second phase of collation and result announcement”.

We must all remain calm and peaceful as we are ready for the second phase of collation and results announcement. #GO — Godsday P. Orubebe (@ElderGOrubebe) March 31, 2015

However, in raging outburst, he brought the proceedings to a temporary halt, insisting that the collation would not continue.

“Professor Jega! You cannot continue,” he shouted for minutes.

After his outburst, the chairman of the INEC said the ruling party had not submitted any written petition to the commission.

“Yesterday, after we took the first batch of results in this hall and as we declared a recess, as I was working down to the office, my PA came to me and said that here are some papers that the PDP representatives gave to him.

“I told my PA to take back the documents to them, that we don’t collect petitions on the platform where we are collating results.

“As I speak to you, the secretary of the commission is in the office to collect petitions.

“I have started collations and I cannot be receiving petitions in this hall.

“As I speak to you I have not received any petition from my secretary which the PDP has submitted.

“Please, let us be careful about what we say or do. Let us not disrupt a process that has ended peacefully.

During a recess after the incident, Mr Orube said it was “unfortunate that the chairman of the commission allowed things to degenerate to this level”. We approached him quietly. The PDP had in a petition raised issues concerning four states and the petition was taken to their man office. Nobody was ready to take the petition”.