Jonathan Did Not Spend 2tn Naira On Elections – Abati 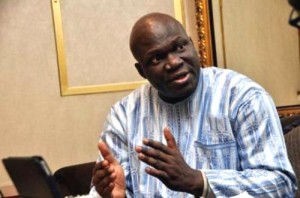 Special Adviser on Media and Publicity to Nigeria’s President, Goodluck Jonathan, has denied the allegations that the Presidency spent 2 trillion Naira on the 2015 general elections.

In an interview with reporters on Sunday, Dr Reuben Abati, described the alleged two trillion Naira spent on the just conclude elections and that a Committee of Five had been set up by the President to conduct an audit of how the funds were disbursed by party members and state officials as “mischievous, false and embarrassing”.

He said the President had not set up any committee, noting that it was also not true that the Presidency and the Peoples Democratic Party (PDP) used state funds, or spent two trillion Naira during the campaigns.

Revealing that the annual budget of the Federal Government is a little over four trillion Naira, the President’s spokesman said the rumor was practically suggesting that half of the federal budget was spent on elections.

He said: “This kind of reckless insinuation is meant to incite the public and instigate national crisis”.

“With FAAC having to do everything possible every month to ensure disbursements and with the Federal Government heavily committed to the war against terror in the North East, where is the alleged two trillion Naira from the Federal purse?

“President Jonathan and the People’s Democratic Party conducted the 2015 elections in strict accordance with the rule of law. The suggestion of any unlawful conduct cannot be sustained under any circumstances,” Abati said.

The spokesman further stressed that the President had done his best to protect and strengthen democracy and promote peace, pointing that “he deserves all the accolades that he has received from both Nigerians and the international community for this”.

“Anyone who is engaged in imposing a crisis on the country by any means is not being fair to Nigeria. We can only appeal to the public to be wary of such reckless tactics now on display, which form the substance of an odd, malicious campaign after the elections.

“We are particularly worried that since the March 28 and April 11 elections, some persons have continued to work very hard to diminish the Jonathan Presidency.

“They need to be reminded that the time for politics is over; it is now time to focus on the in-coming government, with emphasis on national development and moving the country forward,” Abati noted.

Prior to the Nigerian President’s spokesman interview, there was a publication earlier on Sunday alleging that the Presidency had spent two trillion Naira on the 2015 General elections and that a Committee of Five had been set up by the President to conduct an audit of how the funds were disbursed by party members and state officials.