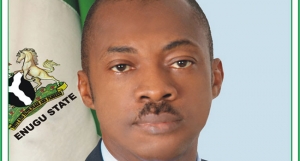 Enugu State Governor, Sullivan Chime, has broken his silence on the impeachment plot against him by 15 Lawmakers in Enugu State House of Assembly, over allegations of forgery of the 2012 supplementary budget and financial misconduct.

Governor Chime, who denied forging any budget document or tried borrowing any money barely three weeks to his exit, said the latest antics of the House of Assembly is as a result of his refusal to succumb to their monetary appeals after they had approved the loan.

According to the Governor, “Since last year September, the said eleven billion naira they are raising their voices against had been long approved by the Legislators and it is the same figure that is reflecting in the approved budget that you also have in the supplementary budget, which they are now referring to as fake”.

He also says that, though, he is yet to receive any impeachment notice, the moves by the Lawmakers against him will not prevail as the constitution requires a simple two third majority, which the house, as presently constituted, would find impossible to realise.